The Templar Revelation: Secret Guardians of the True Identity of Christ may be the driest book I have ever read, made all the drier by the fact that its very title promises revelatory information. Reading this all the way through took me back to my paper-writing days in college. Remember all those books you had to cite at the end? This is one of them. It is not for the casual reader to just be picked up for leisure. 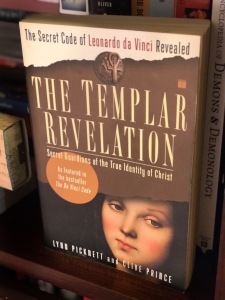 I am not bashing history, mind you, or any sort of analysis of it. I adore history; apart from reading, writing and binge-watching Broadchurch, I wish I could spend all my time as a student of history. (Tyrion Lannister comes to mind: “I drink and I know things.” Life goals in a nutshell!) I am also not bashing any alternate/conflicting viewpoint to my Catholic faith. So I suppose one of my biggest beefs with The Templar Revelation is its style and layout.

Honestly, if you want to get to the “sensational” bit, go directly to Part II on page 225. No, don’t even give the first 2/3 of the book a glance. I am quite serious. Ignore my warning at your own peril. If you’re wise, you’ll just read my summation below. (Does this reveal me as an aforementioned “casual reader”, who chose a book a little out of her depth? Perhaps, but, my technical notes below still have merit.)

Part I is why I describe the book as a slog. Our author researchers, Lynn Picknett and Clive Prince, “take us along” as they travel the map (mainly France) to track down legends and facts of many secret-for-centuries-but-now-recognized-as-household-names-societies like the Priory of Sion, the Knights Templar, the Freemasons, and to a lesser degree, the Rosicrucians. They inadvertently make their point that these shadowy societies are all interconnected – especially by whom said societies venerated – because they are all so very difficult to tell apart on the page. A diagram, even a timeline, would not have gone amiss, especially since Picknett and Prince go on to list by name many of the leaders/grand masters of each organization. (After a while, a reader may be inclined to think that all these names are only dropped in a bid to prove Picknett and Prince actually did all this research.) Reading all these names, with new ones on nearly every page, is reminiscent of that moment you enter a relative’s home for the holidays, and you struggle to remember just how you’re related to all these people who are strangers to you 364 days out of the year.

What also would have a helped a great deal was a map. Or two or three or seven. Yes, I admit it, I am geographically challenged and while, like I said, The Templar Revelation is not for the casual reader, I do believe giving readers a map for reference is absolutely key to helping them understand the relationships and distance between Rennes-le-Chateau, Nice, the Languedoc, etc. Perhaps I’m just more of a visual learner than most.

In that same vein, I have another bone to pick. The embarrassingly poor quality of the reference images makes it far more challenging to grasp the intricate and detailed analyses of the many artworks, statues, mosaics, churches, and more, than it needs to be. If you’re going to cite these as examples of evidence for your theories that John the Baptist was even more important than Jesus Christ, that Mary Magdalene had a role far greater than that of just carrying that alabaster jar of spikenard around and washing Jesus’ feet, then you had better have hi-res reproductions of said artworks. The “reference images” are printed in two sections of glossy inserts midway through the book. To the publisher, I say: eliminate these on any future reprints. If you’re not going to do this right, don’t waste your money or readers’ time. I sought out the images on Google anyway. It should be noted that any icon, statue, church or painting mentioned did not have a ‘Figure 3 on page 176′ to let the reader know a “reference image” was provided. To further make my point, a specific example: Particular attention is paid to a mural in the Notre-Dame de France in London, (painted by alleged Priory of Sion Grand Master Jean Cocteau) where one of the figures features an eye that is immediately recognizable as the ichthys (p. 39) The contrast of the provided reference image of this mural is so dark, this ichthys-eyed figure is completely lost.

Back to the summation.

The point of this first portion is to show that there is more than just coincidences uniting the locations of Black Madonnas, strongholds of the Cathars, venerations of John the Baptist, and the “odd interpretations” of recognizable Christian events by Leonardo da Vinci. The first chapter, “The Secret Code of Leonardo da Vinci”, discusses several of his works in great detail. The Last Supper, Adoration of the Magi, Virgin on the Rocks. While I do complain about having to pull up the images on Google as I read (the book I have of all of da Vinci’s works is a true coffee table book, and not lap-friendly), this was the only portion of Part I I found enjoyable.

From here, the authors dig deeper, to see what da Vinci might have been hinting at with his odd messages. And this is where I feel the book suffers its greatest shortcoming. This is where Picknett and Prince’s editor failed them.

With readers’ appetites sufficiently whetted, it would have been much easier to give them Part II now, (keeping the da Vinci chapter as a lengthy introduction), as opposed to dragging them all over the map in search of others who shared this mystery belief of da Vinci’s.  Said mystery belief is – spoiler alert – never definitively revealed. At least, certainly not in how it relates to da Vinci, whose body of work was the catalyst for this entire investigation/book.

223 pages are spent showing how all these coincidences – and yes, some solid evidence and strong detective work – weave a web of truths that lay the groundwork to prove in Part II that the Gospels are (at best) a highly selective and at times plagiarized account of events that may or may not have happened, while arguing that the real and possibly divisive truth about Jesus, John the Baptist, Mary Magdalene, and early Christians, is known only to these secret societies. Said secret societies actually dropped a few breadcrumbs for our intrepid researcher-guides to follow, (how nice of them!) but ah, secret societies are tricky, aren’t they, and are known for their elaborate smokescreens to discourage all non-believers, and test those who are destined to be true initiates (pp. 46-47).

So…whom is the reader supposed to believe?

Skip directly to Part II. You can thank me later.

Part II feels far more “to the point” than the first 223 pages. And here I feel I should administer a bit of a warning: for those who find any analysis of Christ and Christianity, the Church, et al, or any questioning of the veracity of the Gospels – if any of this is troubling, distasteful or offensive to you, you might wish to steer clear of this portion. Frankly, if that applies to you, you may wish to avoid the book altogether. However, I’m fairly certain that if this is the case, you wouldn’t be seeking this book out anyway.

Now, as a practicing Catholic, did it bother or “get to” me? Yes, at least in the sense it forced me to give a good hard look at scholarship I’d not known about, let alone considered.

First, it reminded me – rather unequivocally – of just how little I know about the Bible. I like to think I know quite a lot about Catholic dogma (and Christianity in general) but a lot of that is derived from independent study across numerous books and equally numerous topics. But I have never read the source material cover to cover.

The second aspect that challenged me, is the fact there is a good deal of scholarly evidence (that begs to be taken seriously) that questions whether or not the Bible actually is “source material”, and whether or not Jesus’ teachings were as “original”, “new”, and/or “radical” as the Church would have its flock to believe. According to Picknett and Prince, there are far too many parallels – which they lay out in detail, with plenty of works cited in their appendices to back them up – between Jesus’ teachings, miracles, and ultimately His resurrection, and the Egyptian cult(s) of Osiris and Isis to be ignored.

This was troubling for me in many regards, not the least of which was that these new insights threatened not so much to negate but rather significantly alter what I have believed, all my life. Even now, about a week after having finished the book, one nagging question continues to float to the forefront of my mind: if many of my Catholic/Christian beliefs were repurposed from the roots of Egyptian mythology…what will happen when I die? Life after death…Heaven, Hell…is eternal life really real?

Does this uncomfortable examination of my own beliefs preclude me from reading further about the topic(s)? No. I find myself desirous to learn more about Egyptian mythology, as well as early Christianity. But will I read this book again to better absorb it? I am 99% certain I will not, and am equally certain that most readers who stuck with it to the finish won’t revisit it either.

Overall rating: The amateur historian in me gives The Templar Revelation three &’s out of five, because the topic is fascinating. However, for anyone who has not read very much about the Templars, Priory of Scion, Freemasons, Catholicism, etc. etc. ad nauseam, I highly suggest you seek out a different book to begin your journey. Put together with what I feel are unforgivable errors/missteps in the book’s layout and a peculiar style of writing (at least once a page I had to reread sentences because their syntax was so bizarre) my official rating is a single & out of five.