If I try really hard, I can remember a few headline stories from when I was growing up. They aren’t so much “etched” into my memory, as roughly “sketched”; I can recall writing in my diary that “Nancy Kerrigan was hit by a bar” (referring to her physical assault at the 1994 U.S. Figure Skating Championship) as well as sitting in front of the TV when the Oklahoma City bombing took place in 1995. The tragedy on Mount Everest transpired only thirteen months later, in May 1996, but I have no memory of hearing about it.

Into Thin Air, by mountaineer and journalist Jon Krakauer, was not my first experience with the topic of Everest. (The book was lent to me by a cousin, and, based on how long it’s been a resident of my shelves, she must have lent it to me soon after it was published in 1998. If I squint, my mind’s eye can just make out a note tucked inside: Enjoy – I want this one back! Allow me to apologize, Maria, for keeping this for over 20 years. Rest assured, it has been well-cared for.) About a year and a half ago, I read Dan Simmons’ novel The Abominable, a thriller set against the backdrop of Everest and the 1924 disappearance of the British climbers who attempted the first ascent of the highest mountain in the world. Now, after reading Into Thin Air, I imagine Simmons was greatly inspired by Krakauer’s account. But it was Simmons’ fiction that introduced me to the many dangers of mountaineering – frostbite and high altitude sickness, just to name a couple – along with the harsh reality that a climber’s greatest challenge comes not from reaching the 29,029ft summit, but making it back down the mountain alive. 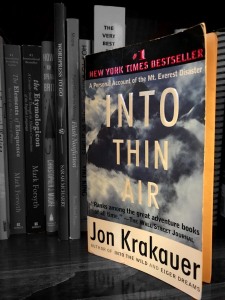 As a member of one of many expeditions that year, Krakauer documents these challenges with haunting clarity. His prose is equal parts technical, as he explains the terminology of mountaineering and summit preparation; intimate, as he introduces us to his fellow climbers; and just plain beautiful, as he recounts the trek through the Khumbu region of Nepal as they approach the base of Everest (p. 61):

The first six days of the trek went by in an ambrosial blur. The trail took us past glades of juniper and dwarf birch, blue pine and rhododendron, thundering waterfalls, enchanting boulder gardens, burbling streams. The Valkyrian skyline bristled with peaks that I’d been reading about since I was a child.

As many other readers before me have testified, the book was difficult to put down. I had to keep reminding myself that the book in my hands was not a novel, not something to be “enjoyed” in the usual sense. Krakauer’s passion for mountaineering is highly infectious, sometimes so much so that I found myself yearning to tackle the peak the Nepalis call Sagarmatha, the “goddess of the sky”.

The expedition begins in earnest with the process of altitude acclimatization (leaving Base Camp at 17,598ft, and gradually spending more and more time at greater and greater elevations) in order to prepare for the extremely thin air at the top of the world. It’s not long before a sense of dread darkens the pages. This isn’t quite the normal jangled nerves, but rather the feeling of dominoes being painstakingly arranged. Granted, this was written with the benefit – or curse – of hindsight, and we as the reader know the outcome, before we even open the book. So while it is easy to point out the “danger signs” from the comfort and safety of one’s favorite chair, it is important to bear in mind that events are rarely so clear cut when they’re unfolding for their participants. This is not lost on the author, who admits to being plagued with symptoms of survivor’s guilt in his introduction:

Through a fog of messy emotions…I obsessively mulled the circumstances of my companions’ deaths. … What happened on the mountain was gnawing my guts out. I thought that writing the book might purge Everest from my life.

After reaching the summit, the dominoes begin to fall with as much speed and devastation as an avalanche. Krakauer doesn’t spare the reader the breathtaking horror of the storm that descends upon the expedition; with a hand on the reader’s back, he pushes us right to the edge of a yawning crevasse. And we can’t look away, especially when one remembers all this pain, madness, emotional trauma, all this death, actually befell real people.

As someone who has faced her own “Everest” of sorts, I can wholeheartedly commiserate with Krakauer’s obsessive desire to commit all to paper, in the hopes it will act as a talisman to protect us from the pain of remembering. Everyone copes with tragedy differently, but many relive it daily for the rest of their lives. On its surface, this may appear masochistic, but such is the human mind, attempting to make sense of the senseless.

Overall rating: I give Into Thin Air five &’s out of five. While publishing his account doesn’t seem to have wholly assuaged the author’s feelings of guilt and doubt, he provides the reader with an opportunity to appreciate Everest as realistically as possible without having to strap on a pair of crampons and set foot on the mountain. As vivid as the descriptions are, however, it is the visceral, nearly tangible anguish and rawness that will leave indelible marks on the reader, long after returning the book to its shelf.* (Or, in my case, to its original owner.)

*In this Kindle Age, I do realize there is no physical book to return to a physical shelf, but there are those of us who still possess these bound-and-glued relics, and prefer them to the digitized turn of a page.