I can already tell as I populate this list that many of my posts will start with an earnest, “I wanted to like this, I really truly did.”

And so it goes with Michael Sims’ nonfiction Arthur and Sherlock: Conan Doyle and the Creation of Holmes, which is about as dry as the paper it’s written on. 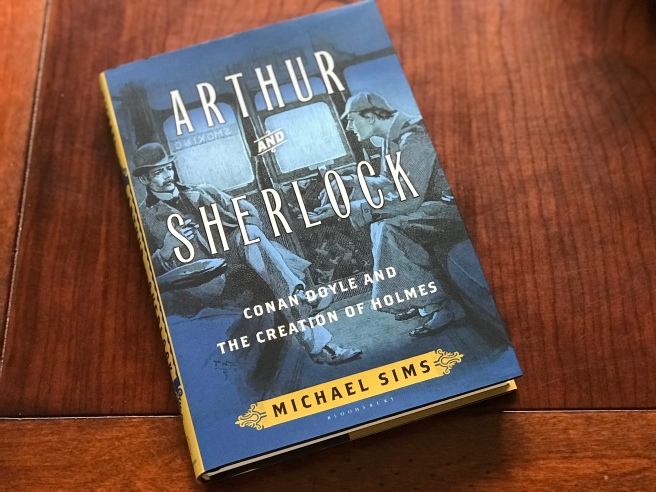 The book is 234 pages; that includes a dense 11 page bibliography, and does not include the index. All told there is about 197 pages of reading material, and I was very impressed by the evident amount of research. As an author who loses herself in research tangents (Common thoughts as I tumble down the research rabbit hole: “Everything is connected!”, “No loose ends!”, “This thread must go somewhere important!”, “There’s no way I can’t include this too!”, “I’ll just click on one more link…!”, etc. etc. etc.) I will be the first to commend Sims for his hard work in chasing down all the details he presents.

However. And it’s a big however.

It wasn’t long before I got the feeling that certain facts were included simply because Sims was proud for having found them. It was like wading into the Atlantic Ocean; at first you’re in awe, overwhelmed by the sheer size of it, and the depth. But as you get further from the shore, the waves (a.k.a. information overload) hit you harder, relentlessly, and before you can catch your breath, another crashes over you…

Alright, maybe that’s a bit too dramatic of a metaphor, but it makes my point. The reader quickly becomes disoriented with all the name-dropping, how so-and-so was renowned for this, but that is only because another doctor paved the way for him by achieving that fifty years prior, which was exactly twelve years before Arthur Conan Doyle was born –

See what I mean? There is little to no discernment in regard to what is shared with the reader as it relates to the creation of the character known as Sherlock. “Discernment” is the key word here: rather than document only what directly affected Conan Doyle’s life, his creative process, Sims sets out to prove the butterfly effect of chaos theory.

I give Arthur and Sherlock: Conan Doyle and the Creation of Holmes two &’s out of five.

Side note: I cannot be the only one who finds the resemblance between Dr. Joseph Bell, one of the main (if not the main) sources of inspiration for Sherlock’s character, and one of the more famous actors to portray the sleuth, Benedict Cumberbatch, eerily uncanny.

2 thoughts on “Review – “Arthur and Sherlock””